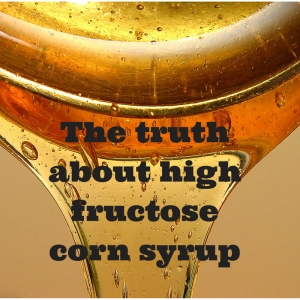 There has been much discussion on high fructose corn syrup (HFCS). Many have blamed HFCS for the rising obesity epidemic in the US. The Corn Refiners Association has stated that HFCS is “all natural” and is “okay in moderation”.

So what, exactly, is high fructose corn syrup?

HFCS is a sweetener and preservative used in many processed foods. It is made by processing cornstarch to change its sugars from glucose to fructose. Not only do you find HFCS in things like Twinkies and sodas, but in breads, cereals, ketchup, and salad dressing. When you start checking labels, you will be shocked at just how many things contain HFCS.

The reason HFCS is such a hazard is that fructose is more easily converted into fat by your liver than is sucrose, which increases the fat levels in your bloodstream. A research team at the University of Texas found that fat synthesis with fructose happens more quickly, even in meals also containing glucose. When the body’s metabolic pathway gets flooded with fructose, the body will slow the processing pathway down. Fructose enters the pathway later than glucose does and so its movement into fat synthesis is uncontrolled.

HFCS has been around for quite awhile. Back in the 1980’s, companies like Coca-Cola and Pepsi switched from using sucrose in their products to HFCS. But why the switch? Back in 1982 a system of price supports and sugar quotas made importing sugar into the US and Canada incredibly expensive. High fructose corn syrup, on the other hand, is incredibly cheap to produce due to corn subsidies. Also, because its a liquid, HFCS is easy to blend and easy to ship. Many, many other food manufacturers began adding HFCS to their products. The American public never even knew the change was made.

Another controversy has arisen regarding HFCS: the effect on the environment.

Most corn is grown as a monoculture, meaning the land is only used for corn instead of rotating the crops. This makes for a whole lot of corn but it also requires  a whole lot of  fertilizer and pesticides. Growing corn this way also depletes the soil’s nutrients and weakens the topsoil. Michael Pollen, author of “The Omnivore’s Dilemma” and “In Defense of Food: An Eater’s Manifesto”, writes that “the environmental footprint of HFCS is deep and wide. Look no further than the dead zone in the Gulf [of Mexico], an area the size of New Jersey where virtually nothing will live because it has been starved of oxygen by the fertilizer runoff coming down the Mississippi from the Corn Belt”.

So what’s an acceptable alternative?

The bottom line is to always read labels. The less processed something is, the better it is for your body.

This site uses Akismet to reduce spam. Learn how your comment data is processed.